The name Lalique has become synonymous with beautiful jewellery, perfume bottles, fragrance, opalescent glassware and crystal which exude elegance and quality. It’s a brand that started in 1888 and has continued its journey, evolving for 130 years and still thrives in the present day.

René Lalique was an important influencer during the Art Deco period through his contributions to glassware that continue to delight collectors throughout the world.

René Lalique’s birthplace was Aÿ-en-Champagne, France in 1860. Following the death of his father, he served an apprenticeship with the craftsman and jeweller Louis Aucoc while attending classes at the École des Arts Décoratifs in Paris. In 1885, after gaining recognition as an independent designer for some of the great jewellery Houses such as Jacta, Cartier, and Boucheron, René Lalique took over the workshop of jeweller Jules Destape on Place Gaillon in Paris.

By 1887, Lalique had set up business on Rue du Quatre-Septembre. His creativity flourished as he revolutionised ornate, traditional jewellery-making styles with an application of precious gemstones, semi-precious stones, mother-of-pearl, ivory and horn alongside glass, meticulously selecting his materials based on their unique properties and ability to enhance light and colour in the design. In 1888, René Lalique registered his “RL” stamp and engraved the unique pieces created in his workshop with these letters. His designs became a favourite with leading socialites, were commissioned by the great courts and collected by the elite. He took part in the 1900 Great Exhibition in Paris and in the same year was also named Officer of the French Legion d’Honneur.

It was an early collaboration with Perfumer François Coty that opened glass doors, paving the way for Rene’s success in this material. Coty was so enchanted by Lalique’s designs that he asked his to apply his talent within the perfume industry. Their collaboration was an important step in this sector, as for the first time perfumes were offered for sale in attractive glass bottles. From this point on, Lalique developed designs for the perfume sector, eventually devoting himself entirely to more industrial techniques of glass production. 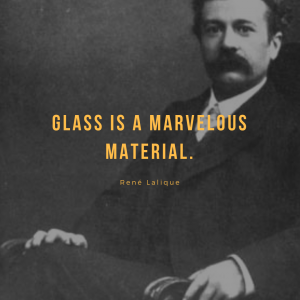 In 1921 René Lalique founded the Verrerie d’Alsace glassworks at Wingen-sur-Moder which is now the world’s only Lalique factory.  As he refined his glassmaking techniques, he developed a signature style that was represented through the contrast between clear and frosted glass. He also experimented with the use of stained glass and adding patina or enamel to his work. The International Exposition of Modern Industrial and Decorative Arts took place in Paris in 1925 and marked the climax of Lalique’s career as a glassmaker, and a triumph for the Art Deco movement.

Throughout his life, René Lalique was commissioned for a series of high-profile projects, such as designing glass doors for Prince Yasuhiko Asaka’s residence in Tokyo and creating the fountain which for a period adorned the Galerie des Champs-Elysées in Paris. He also designed lighting columns and chandeliers for the dining room of the luxury-lined ‘Normandie’.

Over the years we’ve sourced some of the finest Art Nouveau and Art Deco pieces of decorative arts for our worldwide clients.

It’s always a pleasure to find these rare, aesthetic pieces in excellent condition with such fine craftsmanship.

To explore the latest pieces in our Lalique collection, you can browse the rest of our site. 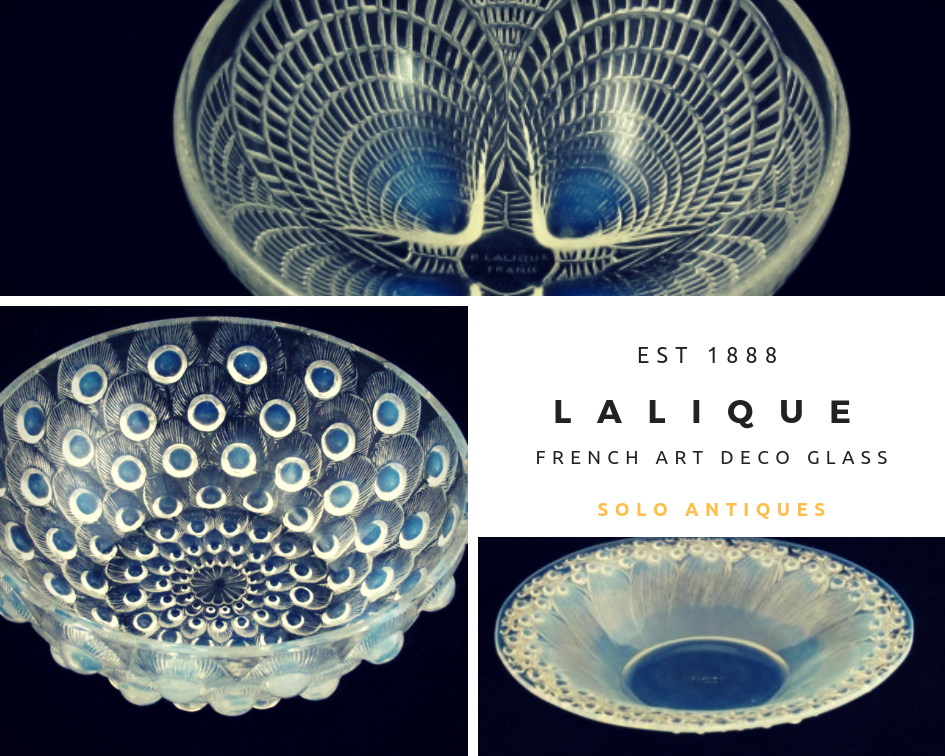 The Lalique Brand Lives On

René Lalique died in 1945 and his son Marc was his natural successor who would bring Lalique into the age of crystal. In 1977, Lalique’s grand-daughter Marie-Claude Lalique became CEO of the company reigniting the tradition of jewellery design and building the fragrance empire. The brand continues to thrive, opening the doors to the Lalique museum in 2011, home to 650 pieces by René Lalique and his successors. In the same year, the Art Deco inspired Lalique Maison collection presented a new collection of furniture, home accessories and household linen. 2011 also saw the launch of Lalique art and in 2012 the l’Odyssée du Feu Sacré collection saw the house return to its master’s roots with the fine jewellery. In recent years René Lalique’s former villa that was built by the designer is now a five-star hotel and restaurant with two Michelin stars. This year a new Lalique hotel and restaurant was opened at Chateau LaFaurie-Peyraguey. We’re sure that Lalique will continue to innovate and delight in the years ahead.